Capacity Building on Climate Investment and Financial Flows in Seychelles

University of Delaware joins the SIDS Lighthouses Initiative as partner

IRENA-AOSIS Memorandum of Understanding signed by both parties in the margins of COP 26, November 2021

The SIDS Lighthouses initiative (LHI) is a framework for action to support Small Island Developing States (SIDS) in their energy transition efforts from fossil fuel dependence to renewables. The Initiative brings together 38 SIDS as well as 32 partners, including developed countries, regional and international organisations, development and multilateral agencies, private companies, research institutes and non-profit organisations. IRENA is the coordinator and facilitator of the initiative.

Launched at the United Nations Climate Summit in the margins of the United Nations General Assembly in 2014, the SIDS LHI was in response to the strong call to action as an outcome of the Third International Conference on SIDS, the S.A.M.O.A. Pathway urging stakeholders to join forces in supporting the development and implementation of SIDS’s national, regional and inter-regional sustainable energy strategies.

The initial SIDS LHI targets for 2020 of mobilising USD 500 million for renewable energy investment, deployment of 100 MW of new solar photovoltaic (PV), 20 MW of new wind power and significant quantities of small hydropower and geothermal energy and ocean energy technology projects; and ensuring that all participating SIDS develop renewable energy roadmaps were achieved and exceeded three years in advance. Furthermore, the revised LHI target of 5 GW of total renewable energy installed capacity in all SIDS by 2023 was also met and exceeded ahead of schedule.

Taking into account the success in surpassing the previous targets, the SIDS LHI has revised its target to 10GW of total renewable energy installed capacity in all SIDS by 2030. This new target has formed the basis of the IRENA-AOSIS Energy Compact and the Ambitious SIDS Climate Action Summit Package, which are operationalised by the SIDS LHI.

With strong SIDS leadership and commitment as reflected by the impressive uptake of renewables resulting in the LHI targets being met and exceeded in advance, IRENA convened a high-level meeting for all the LHI partners in the margins of the United Nations General Assembly in New York in September 2018 to discuss and adopt new priority areas that takes into consideration the evolution of the energy sector as well as addressing SIDS unique challenges.

The new priority areas of the SIDS Lighthouses Initiative are:

2) Expand from assessment and planning to implementing effective, innovative solutions, with continued technical and regulatory advisory services to help SIDS overcome the unique challenges they face.

3) Promote all renewable sources, including geothermal and ocean energy, and step up work to integrate solar PV and wind power.

4) Support the development of bankable projects, fostering access to finance and closer co-operation with the private sector.

5) Strengthen institutional and human capacity development in all segments of the renewable energy value chain.

6) Expand focus beyond power generation to include transportation and other end-use sectors.

11) Reinforce and expand partner engagement, leveraging synergies with existing SIDS initiatives and other IRENA co-ordinated platforms, such as the Global Geothermal Alliance, the International Off-Grid Renewable Energy Conference and the Coalition for Action. 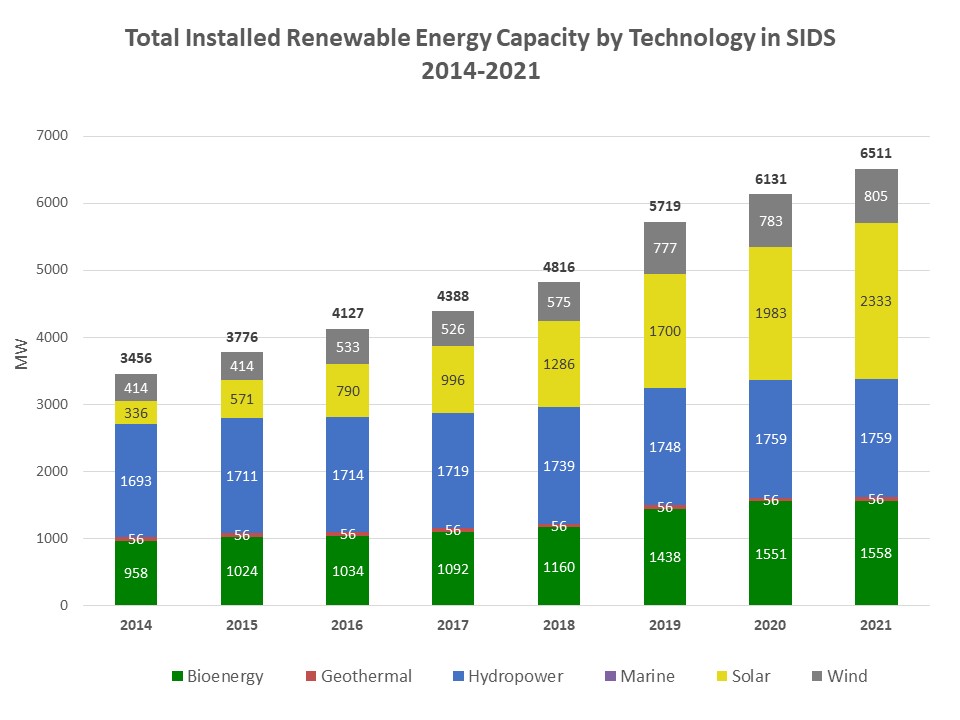 The strong political commitment of SIDS and the remarkable cost reductions in technologies such as solar PV and onshore wind, coupled with the support of a wide range of partners, have made renewables an affordable solution for island states with limited financing and technical capabilities. Since the launch of SIDS LHI in 2014, the uptake of renewable energy in SIDS have been impressive inspite of the COVID-19 pandemic as well as the recurring and intensifying natural disasters and phenomena related to global warming.

The uptake of renewables in SIDS continues to grow consistently. Installed renewable energy capacity in SIDS has grown from 3.5 GW in 2014 to 5.9 GW in 2020. A record growth of 19.5% was noted between 2018 and 2019 while it decreased to 5.3% between 2019 and 2020 which is due to recurring natural disasters and the COVID-19 pandemic. The new installed renewables capacity in 2020 compared to 2019 included 177 MW of solar photovoltaics (PV), 109 MW of bioenergy,10 MW of hydropower and 4 MW of wind while geothermal remained stagnant.

Through the SIDS Lighthouses Initiative, IRENA, in collaboration with the Energy Division, Ministry of Finance, Planning, Economic Development and Physical Development, Grenada, have developed a Capacity Building Programme for Energy Management and Energy Audits.

This webinar on Ocean Thermal Energy Conversion (OTEC) is part of a three- part Technical Webinar Series which aims to promote ocean energy development in SIDS.

SIDS Lighthouses Initiative is supported and coordinated by the International Renewable Energy Agency.